The game from Vivid Games Publishing in Bemobi Channel. 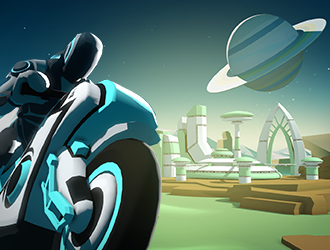 Vivid Games has started the distribution of Gravity Rider on March 9th thanks to cooperation with Bemobi Media e Entretenimento LTDA located in Rio de Janeiro – The game is already fully playable so we could start its distribution earlier. The Android version, that will be available in Bemobi channel is fully playable. Free to play mechanism are not implemented because business-wise they are unnecessary in the subscription model. – informs Remi Kościelny CEO of Vivid Games.

Gravity Rider is a high quality racing game based on competition between users. The tittle offers several dozens of tracks where speed and precision are the keys to winning. – Several-months long soft launch phase proves really high commercial potential of the product. We’re satisfied with metrics and the gamers opinion. Key free to play mechanism are currently implemented. Preparing the version for Bemobi channel requires no additional cost. – adds Wojtek Mazur who coordinates works on Gravity Rider in Vivid Games.

The game from Vivid Games Publishing in Bemobi Channel.
BACK