New casual games in Vivid Games portfolio. At least 10 premieres by the second half of the year. 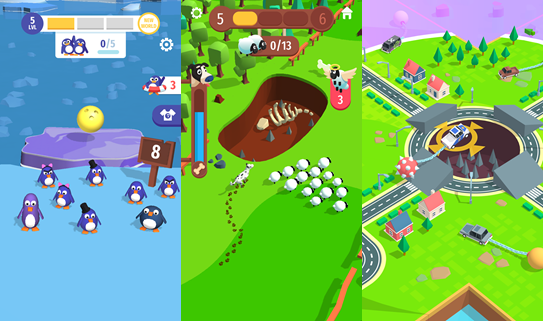 By the end of 2019 to the shops will appear, next to the announced Zombie Blast Crew
and Gravity Rider Zero, 8 new casual games. Among them will appear i.a. Neon Bliss – continuation of the hit Neon Mania and boxing game KO.io.

New titles of Vivid Games from casual games segment are described by interesting gameplay mechanics and easy manoeuvring. In the same time they offer more content with very visible progress of the player. Monetization is leaning on  advertisment formats, subscribction and ability of  direct  product shopping.

- After testing several games from hyper-casual segment we made correction of the program in product area. Casual games, that we plan on publish from now  will stay easy in manoeuvring and being  interesting, and what we change is: topics – from abstract to realistic, construction – from hyper-easy to more developed, characteristic in casual games and form of monetization – with only advertisment we are expanding it for sunscribtion and ability for buying with micropayment– says  Maciej Byczyński, Product Owner of casual games segment in Vivid Games.

In the middle of production on a different levels of advance, there is around 20 titles, i.a.: - Neon Bliss – continuation from one older hit of the studio in title Neon Mania - experimental games of skill based on mapping forms and shapes displayed in neon character, - KO.io – game of „.io” category in which on the ring are several players, and the last one standing is winning, - Crash Drivers – game of„.io” category in which players driving cars fight on areas about surviving, - Sheep Patrol – in which player becomes shepherd’s dog will have to carry  flocks of sheep to fence - Penguinia Raid – in which target will be  saving penguins from melting glacier.

- We are planning on testing several dozen prototypes a year.  Our priority is still a publication of a  high quality  games of very high usefulness metrics, and only these titles are coming to  portfolio. Titles that we are working on are casual games type including newest market trends in  construction range and monetization. We are focusing on sports games production, „.io”, logical and experimental – says Remigiusz Kościelny, CEO of Vivid Games. – In complementing to  mid-core games segment we want to release  in the second half of  2019 about 8 casual games. We are also actively looking for a  new  platform exploatation of our portfolio –  Kościelny adds.